The City of Atlanta has named its new Commissioner of Planning, after long last, and she happens to be a white woman (h/t to John Ruch). Concurrently, in a bizarre and wholly inappropriate seizure of bureaucratic power, the Dept of City Planning has decided to dismantle Neighborhood Planning Unit (NPU) R, in Southwest Atlanta, a predominantly Black area of the city. This is an “administrative” action being taken without precedence nor direction from City Council. Or, if the City Council has directed this, I can find no legislation denoting it. The picture below is from one of DCP’s slides presented to surrounding NPUs earlier this week denoting current boundaries. If you are unfamiliar with this part of Atlanta it is probably because you are white. Southwest Atlanta is an area that was heavily red-lined by the federal government in which Black families could not receive federally backed loans for purchases of homes. Friend of the blog, George Chidi, talks about red-lining and its implications for present day Atlanta here. It remains a predominantly Black owned area of Atlanta, and many of our previous (and current) Mayors reside in this area. And like the MLK corridor and NPU K (on which and within which I reside), the city has a few big, new, and shiny redevelopment projects it wishes to force upon residents with as little public comment as possible. In fact, this NPU R dissolution has no public comment component at all. This is a super easy way of quashing any dissent and disempowering an area. Not a great PR moment for the City of Atlanta, sadly. Hopefully, the Mayor will trot out another glossy press release telling us of another conference or tournament the City will have scored. Folks like those. Never mind the man behind the curtain. 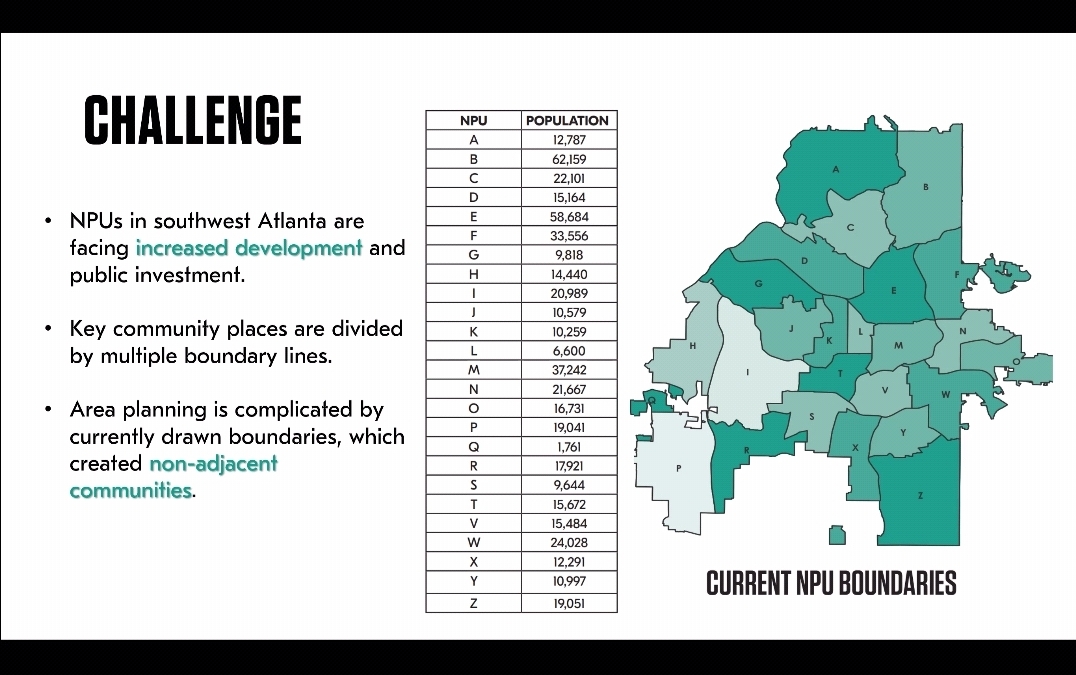 Now I don’t yet know Ms. Prince, and I look forward to meeting her. Friends in Dekalb County tell me that her meetings have always been “on point” when I inquired about her. I can say she responds to emails, which is more than what I received from the Interim Commissioner and her professional photos reveal she knows how to run a comb through her hair, which is more than I can say for her predecessor. I found Tim Keane seemed to be allergic to a brush and laundry at times.

I also want to make something clear about the area: Please do not associate Black with lack of wealth- quite the opposite. If that’s your association, Cascade and Collier Heights would like to invite you to their fabulous lawns and parties. In NPU R, Greenbriar Mall has hosted a Black Santa for as many years as I can remember as a child. My husband and I looked in the Greenbriar Mall area for our home a few years ago, and while there are pockets everywhere around the city of wealth and disparity, please do not associate race with poverty. Instead, this is an area that the City of Atlanta wishes to redevelop with senior citizen housing via Invest Atlanta, a TAD, and MARTA wishes to short change via provide Bus Rapid Transit (BRT) vs. actual rail. I’m sure outsiders see it as a $300M investment in improving the system. I would respectfully say the citizens were charged a tax for light rail and were handed a new bus system. That’s some fiscal mismanagement and false promises that wins no one over to MARTA’s side, sadly.

The NPU system is also not perfect. Districts have not been redrawn since its inception in 1974, under Atlanta’s first Black Mayor, Maynard Jackson. I don’t wish to paint reconsideration of NPU boundaries as a bad thing. I’m just aware that doing things in one area of the city has ramifications for others. I’m also aware of the disempowerment of this general area over generations of the City’s history. What’s more, this creates an inequitable dissolution of power for zoning and land use decisions.

I would frame dissolving NPU R as less about disempowering a club or a group of people, and more akin to packing and cracking in the City of Atlanta zoning and licensing process of decision making.

Here’s what the code says about NPUs:

The council finds that it is in the public interest for the City of Atlanta to have an organized program of neighborhood planning. It is the purpose of this article to provide an opportunity both for the citizenry formally to provide input into the comprehensive development plan of the city and to provide a means by which information concerning the operation of city government can be provided to the citizens of Atlanta. Further, it is the policy of the city to coordinate the recommendations of neighborhood planning units with the formulation of the city’s budget, both capital and operating, in order that the comprehensive development plan be an effective policy guide for the orderly development of the city.

Definitions are important for context, so here’s how the code defines Neighborhood (different from a Neighborhood Planning Unit).

As used in this article:

And because I like knowing to whom people are accountable to- here’s what the code says about NPU accountability:

(d) Accountability. Neighborhood planning units shall be accountable to the residents of the area they represent.

I think this last part is sort of important as the NPU is THE entity that is accountable to citizens, not DCP, on whose matters it votes in support or opposition.

On the issue of equity, allow me to make some comparisons to illustrate my point, using DCP’s slides. Here’s the breakdown of population as presented on their slides. DCP tells us NPUs are supposed to not exceed 30,000 as a population range maximum. Slide below for reference.I really appreciate the date at the top, scrawled in handwriting. We’re going old school for our exhibits!

Now, let’s make a further comparison of other NPUs DCP has decided to redistribute their boundaries. Spoiler: NPUs in Buckhead and Midtown aren’t having boundaries redrawn despite population criteria. Remember folks- these are DCP’s own slides! 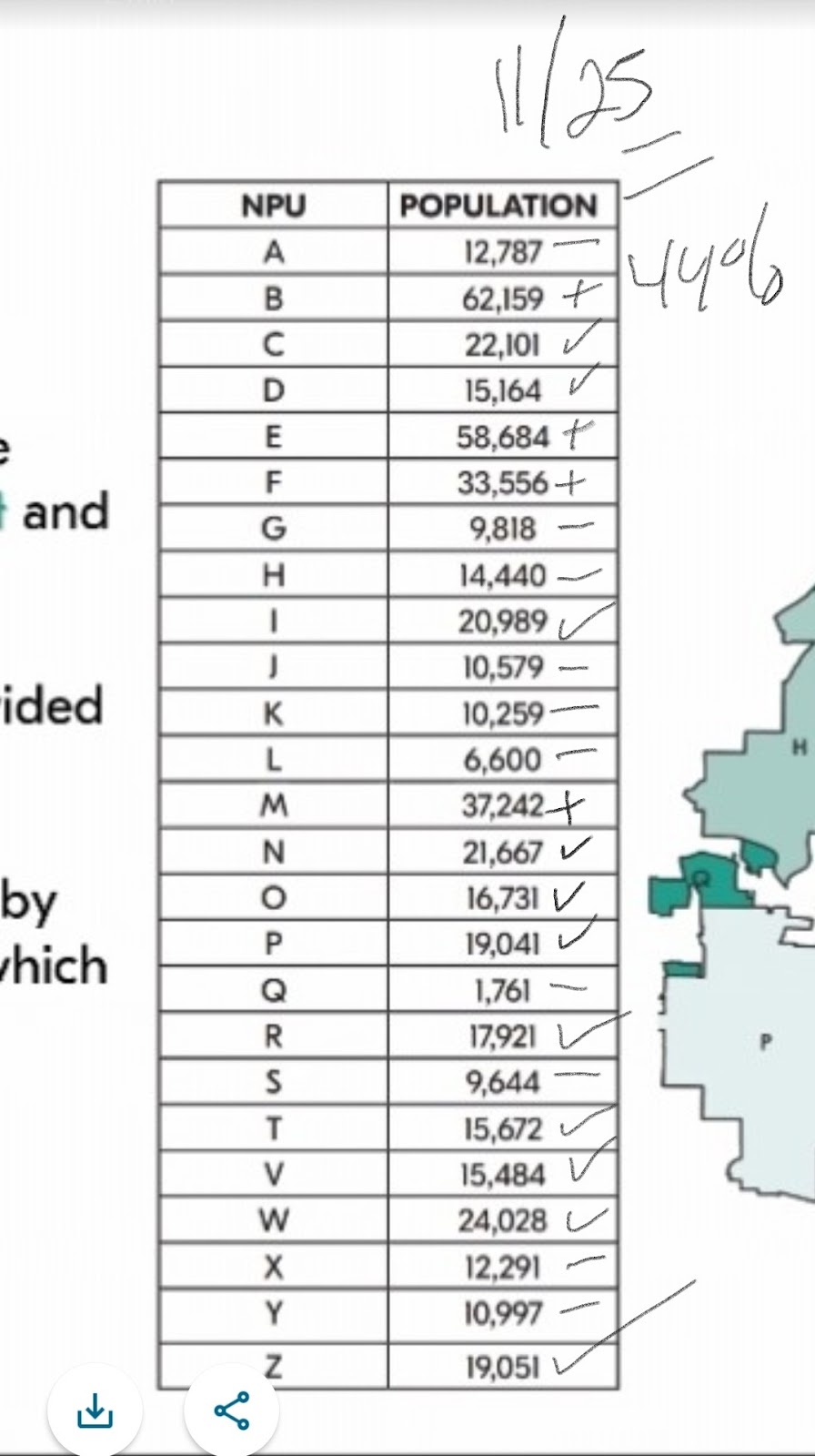 Fascinating, isn’t it how the Dept of City Planning just makes up rules as it goes and then doesn’t equally apply them! Some are more equal than others, I suppose.

You may ask: why does she care?

Because dear reader, if DCP can do it in NPU R, they’ll come for another NPU next. If I were Buckhead or Midtown, I’d be contacting my Council Member this morning. NPUs were created as another means of giving citizens’ voice that required Council members to listen to them. NPU districts are purposefully drawn across City Council district lines so that Council Members are forced to take neighboring areas into account with their legislation. NPU K falls across Council districts 3,4, and 9 but is predominantly Council district 3. As a result, my Council Member, Chairman Jason Dozier, rarely attends our NPU meetings, but Council Member Byron Amos regularly does. My neighborhood, Mozley Park, has many neighbors who would prefer our boundaries to be redrawn to be included in NPU T. This would more align with Council District 4, yet would also divide us almost entirely along MLK Jr. Dr. (my street).

You all may have forgotten about that little transportation project Mayor Reed dreamed up that made it impossible for some of us to turn left out of our driveways on MLK Jr. Dr. in homage to Arthur Blank MLK Jr. Here’s TV and print coverage, featuring my street, earlier this year. The TV coverage glosses over the fact that this project was supposed to be done in preface to the Super Bowl to make Atlanta’s MLK Jr. Dr. the most beautiful MLK Jr. street in the nation- leading directly into the flashy new Mercedez Benz stadium that displaced Black churches and neighbors. The dirty little secret reality of this project was that there was little involvement of, nor information given to myself and other neighbors who live on the street during this project. Maybe I missed a meeting somewhere, but I don’t think so.

This also has direct ramifications on the Atlanta Planning Advisory Board- you know, that board on which I serve, and advises DCP. It dilutes our influence as well, by effectively removing three members of the board. APAB is made up of NPU chairs, delegates, and alternates, and by dissolving NPU R, APAB becomes a board of 24 voting members, and anyone who has counted votes for a living knows you never want an equal number. This makes the voting members an equal number of members for all voting purposes-putting any split decisions to be decided by the President of APAB, whose actions as the City’s handmaiden has exerted tremendous influence over removal of Lily Pontis in regards to Cop City, blocking the appointment of APAB’s designee on the Public Safety Commission, and more recently slow walking the appointment of an overqualified candidate to the ACRB.

Now I guess DCP will call upon the APAB President to dissolve some of her own board’s members.

Either way, the City of Atlanta and its unelected and unaccountable bureaucrats lose more of my faith and the Mayor maintains less of my respect daily. The Black Mecca certainly doesn’t seem to value its predominantly Black area residents’ ability to make their own zoning and land use decisions. The City of Atlanta’s catering to Buckhead’s desire for a police state and now hiring a white woman to preside over the minimization of Black Southwest Atlanta is a Public Affairs nightmare I personally wouldn’t wish to step into. I do look forward to the Karenzilla memes. I’m sure they will be delightful. Take it from another resident of an NPU whose redevelopment/ transportation project turned my street into a gauntlet for speeding, sent home prices skyrocketing, and displaced neighbors. My bet is, NPU R has PLENTY to say, and that’s why the city has great interest in cracking NPU R to silence their voice.