So I attended the Zoning “Workshop” last night- virtually, rather than in person. This was a poor choice because the audio for the meeting was so poor that I had to turn on closed captioning. It was weird, it seemed like they flipped a switch when the presentation was done and all of sudden the audio was fixed to hear the Q & A from the public. I would assert that the Dept. of City Planning (DCP) did this purposefully to prioritize in-person attendance and stymie the ability to engage more from home, but honestly, the presentation offered so little actually useful information I cannot reasonably draw that conclusion, even though the questions from online were acknowledged by one of the folks running the meeting to be of less priority than those offered in person. What I can say, is that what will happen with zoning in my section of the city isn’t any more known because I sat and listened to the presentation than if I hadn’t. I wonder how this contributes to the public engagement pieces as required by the state’s Dept of Community Affairs and if they have any guidelines about that.

In my last piece, I talked about how a piecemeal approach could work well for Atlantans. This was an example of how a piecemeal approach isn’t helpful. This definitely didn’t encourage any faith in DCP in either the questions I heard from the audience in person or the comments within the chat. Most notably, there weren’t any maps. For you know, a dept of the city that is supposed to use maps to demonstrate how things are changing, using a map seems to be the most obvious example of how this really didn’t tell anyone anything. I don’t have a tremendous experience with GIS, but I do understand map layers and census data. It isn’t clear to me why the city can’t demonstrate how maps are actually made at this point. Demonstrating overlays, census tracts, and the 3D element of water and topography would be both visually engaging and meaningful to fully understand how the maps look. TBH, I’ve found Beltline presentations to be more informative than what I saw last night. There were images of things, and large text on the slides, but not a lot of information about what might actually be changing or how.

Here’s an example of a citywide map, regarding the ever-present Atlanta challenge-parking and how it intersects with alcohol-related land uses. We aren’t a city that promotes traveling via transit to avoid DUIs, but maybe one day! This also shows the relative size of the citywide maps, making them apparent, yet not with defining enough characteristics to be meaningful. Here’s a link to the slide deck. 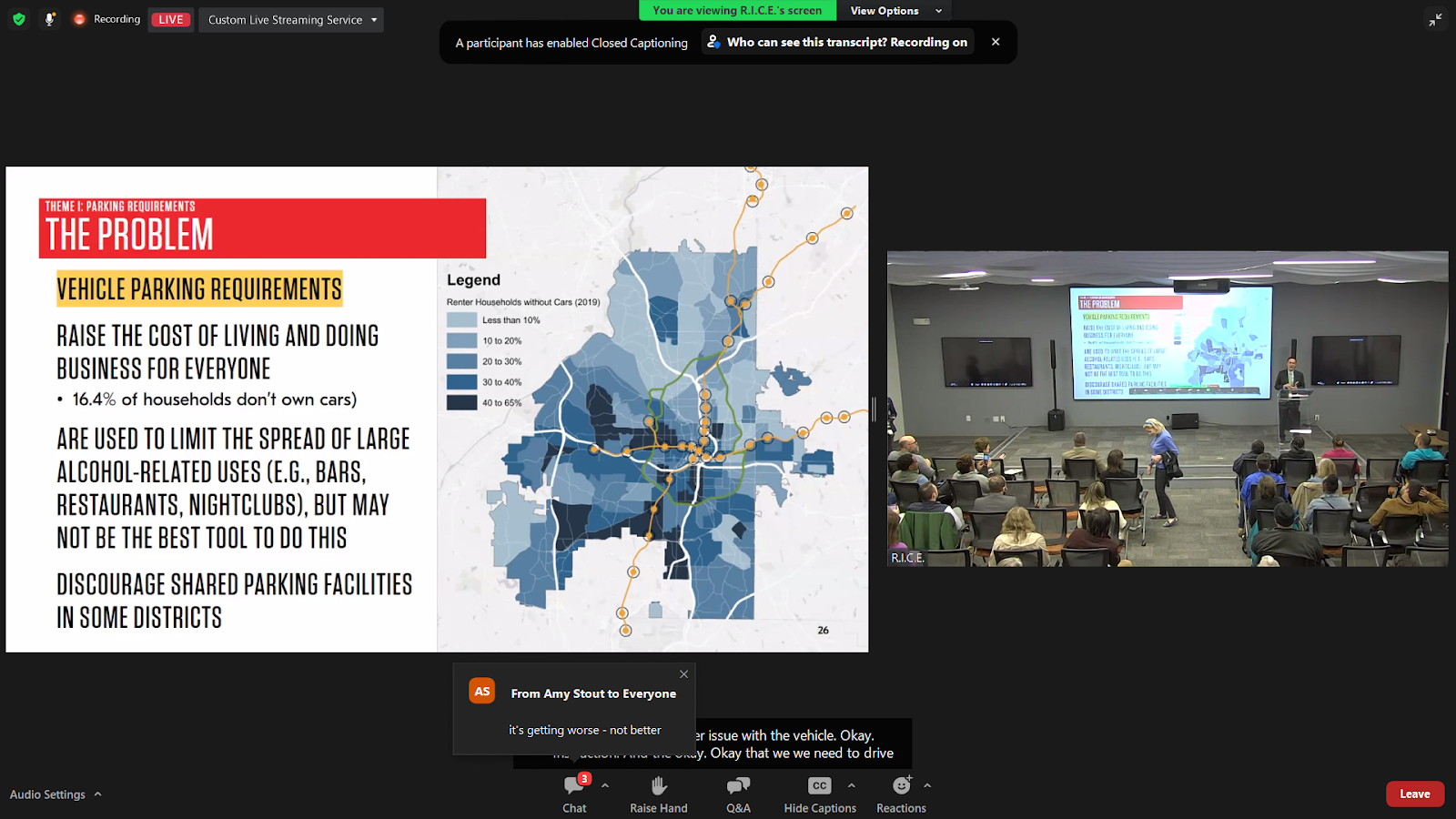 I find this to be prevalent in the City.

To be more accessible seems to translate in city departments to dumbing things down here, which is odd because I find our longer-standing residents (often referred to as “legacy” residents) and citizens to be rather smart people. Atlanta wasn’t part of the cradle of the Civil Rights movement because our residents lack intelligence or how zoning impacts everyday life. I don’t have the expectation that DCP is going to offer something in technical jargon, quite the opposite- DCP should be able to translate said jargon into meaningful examples that can be offered to citizens. It isn’t clear to me why this is so hard and why DCP’s presentations continue to be so opaque. This is the second workshop I’ve attended. I attended both online.

I mean, I can lean on my negative assumptions here, but let’s assume that this is truly a challenge of DCP not knowing their audience and therefore not knowing how to translate appropriately. Wouldn’t it be helpful to provide terms? Visual examples? Should DCP call upon the alignment with APS the Mayor has discussed and get a bunch of school teachers in here to teach us how to approach our city plan? I haven’t met a teacher in Georgia yet who can’t translate meaningfully in the classroom. They do it every day and we pay them far too little for it. If those teachers couldn’t do this translation, the state of Georgia wouldn’t fund them at all. I have to wonder why Atlanta allocates funding to DCP to get so damn little for its citizens in return. I get that you can’t take all the questions from the virtual audience, but to have ended the presentation before its scheduled end time and not taken them, to me, indicates there were some questions DCP didn’t want to answer in that online mix. And to be transparent- none of them were mine.

The only comment I made was actually in regard to another virtual commenter’s assertion that land use, licensure,  and zoning should follow what is being done in that area. I agree with this premise fully, and fellow PP contributor, Buzz has written and spoken openly about barriers to entry for business owners. Zoning is one of those. Our zoning needs to be broad enough to shoulder the disruptive economic development we already have while responding to, rather than stamping out, future economic development.

I wonder if Buckhead will receive the same treatment and approach as what I saw last night.

Thinking back over the Mayor’s Townhall series, Buckhead was markedly different than Cascade Methodist. I don’t just mean how the Mayor approached the audience, but also how the audience approached him. The Mayor took all questions from the audience in Buckhead and carried that approach into Summerhill at his subsequent town hall. I appreciated this approach. What I saw at Cascade Methodist demonstrated something I see in the city rather prevalently, sadly. In a city with Black leaders occupying the highest positions, our older Black and brown citizens approach leadership more with a hat in hand approach to ask “pretty please” for things vs. white citizens (of any age) who demand it. Refreshingly, I am always pleased when I see younger Black folks in meetings asking harder questions. This hangover from the racism of the past seems to be something they don’t suffer from as much, thankfully.

All Citizens of Atlanta should know they have a right to demand things from their city government. The only reason elected leaders have power is because the citizens have loaned it to them. While city departments aren’t elected, they are beholden to those who are elected and our city leaders should be demanding more than what DCP is getting currently. I noticed Council member Mary Norwood in the front row. I wish I’d seen more Council members present. I wonder if the presentation would have been different. EDIT: h/t to Griffin Wasdin, who was present in person, and shared with me that Councilmembers Dozier, Bakhtiari, Westmoreland, Overstreet, and Norwood were all present.

One of the notable statements the presenter made (off-handedly, might I add) was that “they” are aware that the city is “losing low-income residents”. You don’t say!?! This could be why the Governor and Mayor are aligned! Look at that! I hope that statement is repeated in the next Zoning Workshop in Buckhead. I think that Buckhead might be an audience that needs to hear that more, probably not as much as my section of the city, namely because we’re living it here.

And where is APAB in the midst, you might wonder?

We can’t even seem to get DCP to provide a presentation to us. The official line is that the gentlemen who offered the presentation last night is not contracted to provide us with a presentation, but…the rumor mill tells me DCP is afraid that their employees will end up in Peach Pundit. Isn’t that sad? A whole city Dept of Atlanta is afraid of a middle-aged woman with the ability to post on the interwebs.

I can’t make this up, y’all. This is the Atlanta in which I reside. While I may think of Atlanta as a crown jewel of the South, her systems and depts probably wouldn’t pass the smell test of other cities across Georgia.

A small benefit that has arrived since publication earlier this week is that the Commissioner of Planning will be present for a meet and greet after the January APAB meeting, which occurs on Jan. 28, 2023, beginning at 10 am, at City Hall. She’ll have to wait through a ridiculously long agenda, but perhaps that is fitting for a woman who made her citywide volunteers wait to meet her. I personally have a birthday party to attend in the Milton/Alpharetta area of a high school friend that I already RSVPed to, but I’m sure the Commissioner will appreciate the reprieve of my questions regarding her office.

If you wish to join along in the Atlanta Zoning Workshops, the next will be at the Buckhead Library, 259 Buckhead Ave. NE, Atlanta, GA 30305 or register here for online participation. No promise the audio will be better though!